Computer viruses are simply the programs which infect our computer hardware and software. They are not biological viruses. They are developed by using programming language. Computer viruses are the man-made small malicious programs that disturbs the normal functioning of the computer in many ways. Viruses are capable of reproducing themselves and capable of causing great harm to data or other programs on the computer system. They may damage data and software in the computer. Viruses also produce several unusual symptoms in our computer and gives trouble to the user while working with computer. They irritate the user by showing unexpected behavior in the computer screen. At the first time, computer viruses was created by the computer programmers to give entertainment for computer users by displaying different funny messages on the screen.

We can define computer viruses in the following ways:

Computer virus is a small malicious program capable of reproducing itself and causes great harm to data or other programs on the computer system.

A computer virus is an illegal, self-replicating destructive program that disturbs the normal functioning of the computer in many ways.

A computer virus is a  program. a block of executable code, which attaches itself to, overwrite or otherwise replaces another program in order to reproduce itself without a knowledge of a computer user. 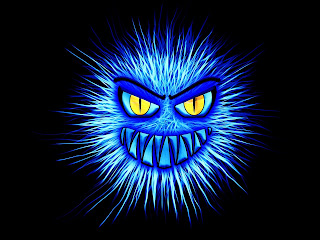 The roots of the modern computer viruses go back to 1949 when Hungarian mathematician, JOHN VON NEUMANN introduced the concept of replicating computer program. He presented a paper on the "Theory and Organization of Complicated Automata," in which he postulated that a computer program could reproduce. This theory was tested in the 1950's at Bell Laboratories when a game called "Core Wars" was developed, in which players created tiny computer programs that attacked, erased and tried to propagate on an opponent's system. In 1983, American electronic engineer FRED RICK COHEN first introduced the term "COMPUTER VIRUS" to describe a self-replicating computer program. In 1987 two Pakistani brothers AMJAD and ALVI created the world's first PC virus named "C-Brain". The brothers created the virus to stop pirated copies of software software developed from Alvi's Brain Computer Shop. This virus spread worldwide by 1987.

In 1988 two new viruses appeared: Stone, the first bootstrap-sector virus and the Internet worm, which crossed the United States overnight via computer network. Computer viruses grew more sophisticated in the 1990's. In 1995 the first macro language virus, WinWord Concept, was created. In 1999 the Melissa macro virus, spread by e-mail, disabled e-mail servers around the world for several hours and in some cases several days. The "I LOVE YOU" virus introduced in 2000. It is the world's most prevalent and costly viruses. By the time the outbreak was finally brought under control, losses were estimated at US$10 billion and is said to have infected 1 in every 5 PCs worldwide.

Now-a-days the number of computer viruses are increasing day by day. Today there are thousands of viruses. Different viruses show different symptoms on the computer. As virus creators become more sophisticated, they learned new tricks: One important trick was the ability to load viruses into memory so they could keep running in the background as long as the computer remained on. This gave viruses a much more effective way to replicate themselves. Another trick was the ability to infect the boot sector on hard disks.

Programmers develop antivirus software to protect computer from viruses. Antivirus software is a kind of software that detects and removes viruses from the computer. In computer history, there is not reliable data about who developed first antivirus software and when. The first publicly-known antivirus was produced by Bernt Fix in early 1987. In 1988 AIDSTEST and AntiVir were released. Peter Norton made a number of contributions to the growing field of virus detection. He developed Norton Anti-virus in 1992. It is one of the most popular antivirus software till date. Some most advanced anti-virus software being used nowadays are: Kaspersky, Avast, Norton, etc.

Cause of Creating Computer Viruses

On the basis of their ways of infecting, viruses can be categorized into various types. Among them some common types of viruses are described below.

Computer viruses are those programs which are capable of reproducing themselves and capable of spreading from one computer to other through different media. Viruses hide themselves in other files and folders and they easily transfer along with the infected files or folders without the knowledge of a user. For example, an e-mail virus travels as an attachment to e-mail messages and usually replicates itself by automatically mailing itself to dozens of people in the victim's e-mail address book. Nowadays, Internet is being the main means of spreading computer viruses all over the world. The most common ways of spreading computer viruses are as follows:

Methods to Protect Computer from Virus

Viruses main mission is to spread out and then get active. Some viruses just spread out and never activate. Viruses when spread out, they make copies of self. Computer viruses spread from one computer to other through E-mail, Internet, USB drive (pen drive),floppy disks, CD/DVD and other storage devices. Computer viruses cause a great harm in our computer system. Viruses irritate us while using computer by showing unexpected behavior in the computer, Annually, millions of dollars are lost throughout the world due to the viruses. So, it is necessary to protect our computers from the viruses. As there is saying "prevention is better than cure" so we should follow the safety measures in order to protect our computer from viruses.

The following are the common preventive measures from computer viruses.