Greater Nepal In Quest Of Boundary 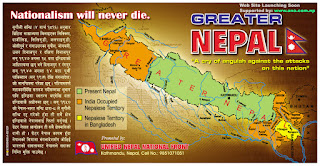 Greater Nepal is a concept of Nepal extending beyond its present boundaries to include present-day Indian territories controlled briefly by the Gurkha army after defeating some South Asian kingdoms in wars fought from 1791 to 1804 but ceded to the East India Company under the Sugauli Treaty (treaty for Partition of Nepal) after the Gurkha king was defeated in 1814–16 Anglo-Nepalese War. In 1813, the historical Greater Nepal extended from the Sutlej to the Tista, spanning 1500 kilometers. Rule over this expanse was brief, however, and in the aftermath of the 1814-1815 war with the East India Company, the Gorkhali realm was whittled down considerably. The real-time Gorkhali presence in Garhwal was for over a decade; Kumaon for 25 years; and Sikkim for 33 years. The Treaty of Sugauli, between the Gorkhali king and the Company, was ratified in 1816. It caused Nepal to lose about 105,000 km2 of territory and left Nepal as she is today, with 147,181 km2 of the present total area.

Ruler of a small Gorkha region of Nepal King Prithivi Narayan Shah decided to extend their territory. He defeated major principalities in wars and unified them under his rule starting from the 1740s ending with shifting of his Gorkha Kingdom’s capital from the Gorkha region to Kathmandu in 1769. He then attacked and absorbed dozens of other small principalities of Nepal area to his Gorkha kingdom followed by his sons Pratap Singh Shah and Bahadur Shah until 1794.

After the victory over Kumaon, Garhwal, Kangra, Sikkim, and Darjeeling by the Gorkha Army, the war between Nepal and British East India Company ended with the defeat of Gurkhas. The dispute was because of no fixed boundary which leads Nepal forced to sign the Treaty of Sugauli on 2 December 1815 after the Anglo-Nepalese War of 1814-16. 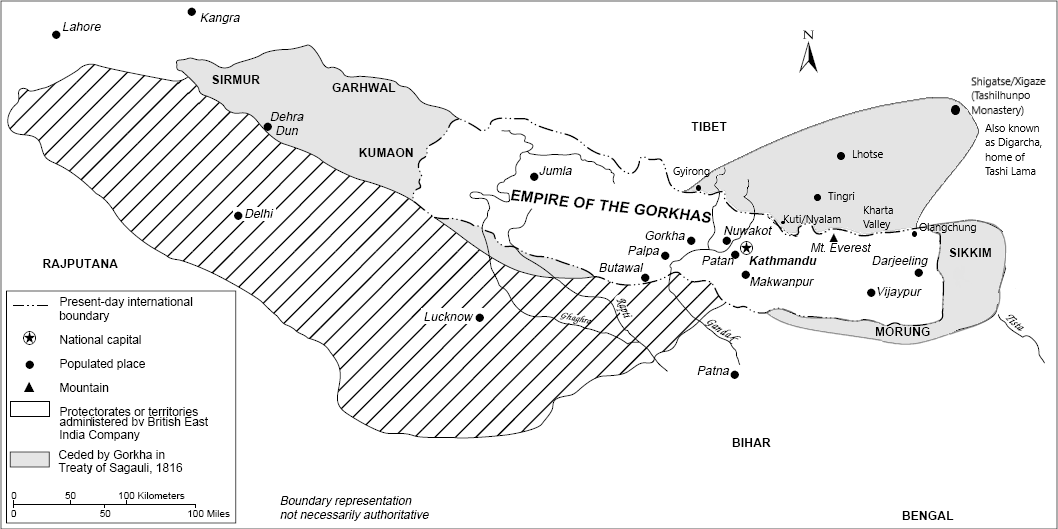 The East India Company had come to rule much of north India by the time the Gurkhas attacked kingdoms in South Asia. The Company became the de facto ruler of South Asia east of Satluj river in place of the Moghuls, Marathas and other kings, especially after defeating the Marathas in 1803 in Second Anglo-Maratha War. After firmly establishing its rule over Delhi in 1803, the Company attacked the Gorkhas and repulsed them from the Kumaon Kingdom and the Garhwal Kingdom in the area west of the Kali river and in Sikkim and North Bengal east of Teesta river by 1815. The Gorkhas were forced to accept a peace treaty with the British (the Sugauli Treaty) in 1816.

The people territories that were a part of the Gorkha Empire before the Sugauli Treaty consider themselves as Nepali and wish to be a part of Nepal. There have been critiques that the independent kingdoms which were occupied by Gorkhalis for less than 20 years and lost to the British, cannot be reclaimed.

There is not any official claim by the Government of Nepal or any political party of Nepal to take back the ceded territory to British East India Company by Nepal which is now the territory of the Republic of India. 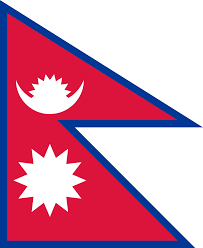 1) According to international laws, if a treaty is signed under threat, it's is void. So, sugauli treaty is void.
2)International laws say that if there is the absence of any of the signatories, the treaty is void.
3) There is no British east India company now (after 1947). So the land is, legally, of Nepal.
4) Even if the Sugauli treaty exists, the land is still Nepal's, legally. Becozz the term "in perpetuity" means something is taken for a lease/rent and the same term is used for the territories of Nepal in the sugauli treaty.
5) The main aim of the treaty of 1950 signed between the U.K. and Nepal was to return back the land of Nepal which the Ranas didn't bother to listen to the British.
And the last one
6) The next treaty signed in 1950 between Nepal and India states that all the treaties signed between Nepal and East India before that day were nullified. So, sugauli treaty is also nullified.
Hence, places like Nainital, Kumaon, Garhwal, Darjeeling, Sikkim, Teria parts up to Allahbad in the south must be returned to Nepal.
PLEASE LIKE AND SHARE THIS POST AMONG YOUR FRIENDS TO CREATE AWARENESS ABOUT GREATER NEPAL CAMPAIGN.
The time is waiting and so are we.
JAY NEPAL!!

Police detained a dozen youths while they were heading towards the Indian Embassy at Lainchaur, Kathmandu, on Friday to torch the copies of the Treaty of Sugauli. The youths from the Greater Nepal Nationalist Front are now in the custody of Maharajgunj police circle. On March 4, 1816, then king of Nepal and the East India Company had ratified the treaty, which caused Nepal to lose huge swathes of across the Tista in the east and across the Sutlej in the west. Police intercepted the youths sporting a banner of the front, while they were heading towards the embassy to set the copies afire in front of the embassy. After police intervention in their rally, the youths shouted slogans in protest.


Fanindra Nepal, chair of the front, said the front has been spearheading a movement demanding the return of the Nepali territories. He condemned the police for intervening in a peaceful protest.

Cadres of the Greater Nepal Rastrabadi Morcha stage a demonstration against the Sugauli Treaty, in Kathmandu, on Friday, March 4, 2016. Photo: Greater Nepal Rastrabadi Morcha
KATHMANDU: Police have arrested 11 cadres of Greater Nepal Rastrabadi Morcha from the premises of the Indian Embassy in Kathmandu on Friday.
They were arrested while demonstrating in front of the Indian Embassy against the Sugauli Treaty which was inked between Nepal and India 200 years ago.
The arrested are Morcha’s Chairperson Phadindra Nepal, Vice-Chair BN Sharma, member Chhabi Panthi, among others.
They chanted various slogans as ‘” We don’t abide by the Sugauli Treaty”, “Return the encroached land” among others.
“We want this issue to be resolved through political means. Hence, the British government should mediate with India for the resolution,” said Morcha’s Chairperson Nepal.
He added that they would continue their demonstration until the issue was resolved.
The Sugauli treaty was signed between the then East India Company of the British government and Nepal on March 4, 1816. Nepal lost one-third of its territory due to the treaty.

2. Map of Greater Nepal gifted to Prince Harry along with the 10-point memorandum on March 23rd, Wednesday, 2016

Greater Nepal Nationalist Campaign on March 23th 2016 Wednesday gifted to Prince Harry, on a visit to Nepal, a map of Greater Nepal, which predates the Treaty of Sugauli that England forced Nepal to sign. The campaign activists handed over the map to the fifth in line to the British throne at the British Embassy in Lainchaur, Kathmandu.


They handed over the map along with a 10-point memorandum to Alison MC Avon, deputy head of mission at the embassy. When the British official inquired about the map, front President Fanindra Nepal said England left India without returning 60,000 sq km of Nepali territory in India. So, it is the responsibility of England to return the land to Nepal, front President Nepal explained.


Only high-level British government authorities can make a decision on the issues mentioned in the memorandum, Alison said, pledging to make the gift available to Prince Harry today itself.

3. One lakh signatures to be submitted to UN demanding the return of Nepali territory lost through ‘Sugauli Treaty’ on January 12, 2019

The Greater Nepal Nationalist Front has begun a signature collection campaign demanding the return of the territory that Nepal lost through the ‘Treaty of Sugauli’.

The ‘Treaty of Sugauli’ was signed on December 2, 1815, and ratified by March 4, 1816, between the East India Company and King of Nepal following the Anglo-Nepalese War of 1814-16, during the reign of King Girwan Juddha Bikram Shah.

The campaign was initiated on January 12, 2019, Friday, marking the Prithvi Jayanti, and from the premises in front of the western gate of Singha Durbar, where the statue of Prithvi Narayan Shah is erected. Signatures will be collected from within and outside the country, and the campaign will continue until coming mid-April, said the Front Chair Phanindra Nepal.
The signatures collected as such will be handed over to the President of Nepal, the UN Secretary-General, the five members of the UN Security Council — China, USA, Russia, the UK and France, and to the SAARC Secretary-General.

India’s new political map places the disputed territory of Kalapani inside its own borders on November 2, 2019, and so on.